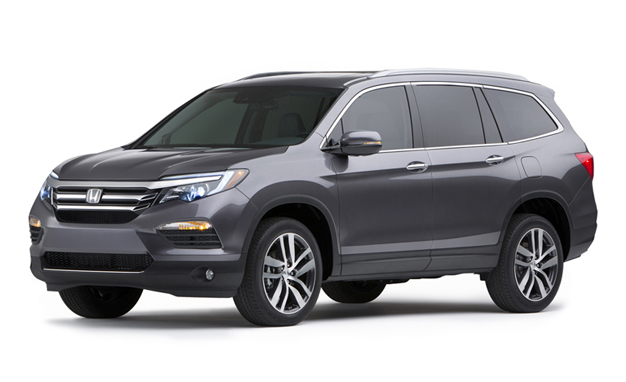 If a stylish, useful, and trouble-free ride is what you’re after, well—ladies and gentlemen, this is your Pilot speaking. The 280-hp 3.5-liter V-6 powers the front or all four wheels through a six-speed automatic; top-level Touring and Elite trims get a nine-speed. The all-wheel-drive system offers torque vectoring for better handling and modes for snow, sand, and mud. The Pilot’s three rows provide plenty of room for all and a host of active-safety tech is available to keep everyone safe. 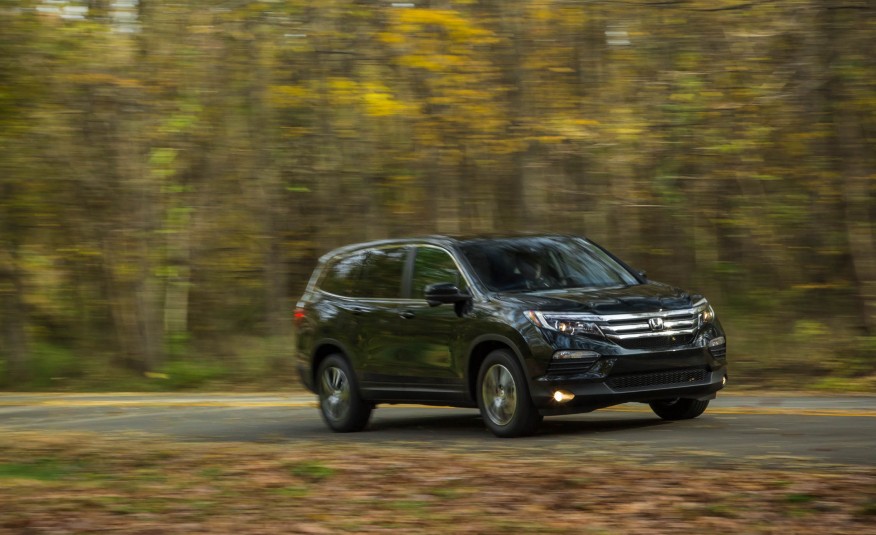 The new Honda Pilot rolls into the 2016 model year with a pricing spectrum that spans five trim levels and $16,425 from one end to the other, each step up tempting the prospective buyer with more goodies, right up to the fully loaded Elite model.

The big Honda clearly is aimed at folks whose motoring agendas include lots of hauling. It can tow—up to 5000 pounds with all-wheel drive, 3500 with front-drive. But more often than not, the payloads entail kids. We probably don’t really need to add that even though minivans are superior in almost all aspects of family hauling, Pilot prospects would rather donate their kids to science than be seen in something with those telltale sliding side doors. 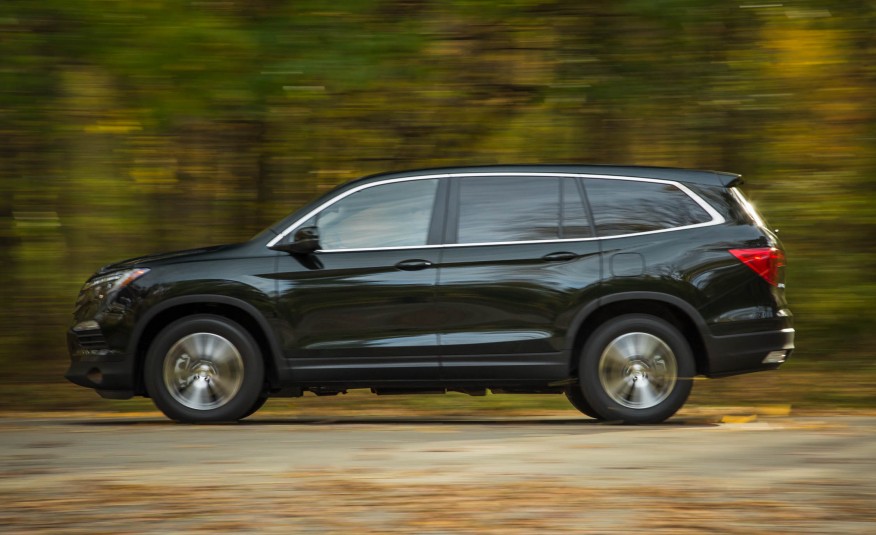 There’s irony in this vehicular phobia, since the Pilot is a close cousin of Honda’s Odyssey minivan, structurally speaking. But image rules in this realm, and image is rarely rooted in rationality. Speaking of image, there are some within our walls who prefer the blockier looks of the previous generation to the slicker styling of the new. But slick is where the entire crossover segment is headed.

Our first test of the generation-three Pilot involved an Elite model, which includes everything in the vehicle’s extensive inventory of features. This time, we’re looking at one of the less expensive versions. If you draw your budgetary line at a Pilot EX, what do you get? What do you forego? Is there a performance sacrifice? And what do you save?

Let’s start with performance. All Pilots are propelled by the same engine, a 3.5-liter V-6 rated for 280 horsepower and 262 lb-ft of torque. That displacement is familiar—the previous Pilot powerplant also was a 3.5 V-6—but the new engine essentially is the same as that used by the Acura MDX, and direct fuel injection gives it a 30-hp edge over its predecessor. This in a vehicle that’s substantially lighter, by as much as nearly 300 pounds, according to Honda. It’s also substantially quicker off the line.

What you don’t get with the lower trim levels—LX, EX, and EX-L—is the slick new nine-speed automatic transmission that comes with the Touring and Elite models. The LX, EX, and EX-L are equipped with a six-speed automatic. That’s one cog more than the previous Pilot, but the nine-speed does a better job of keeping the engine in the sweet spot of its power band. And it includes shift paddles, which aren’t part of the deal with the six-speed. 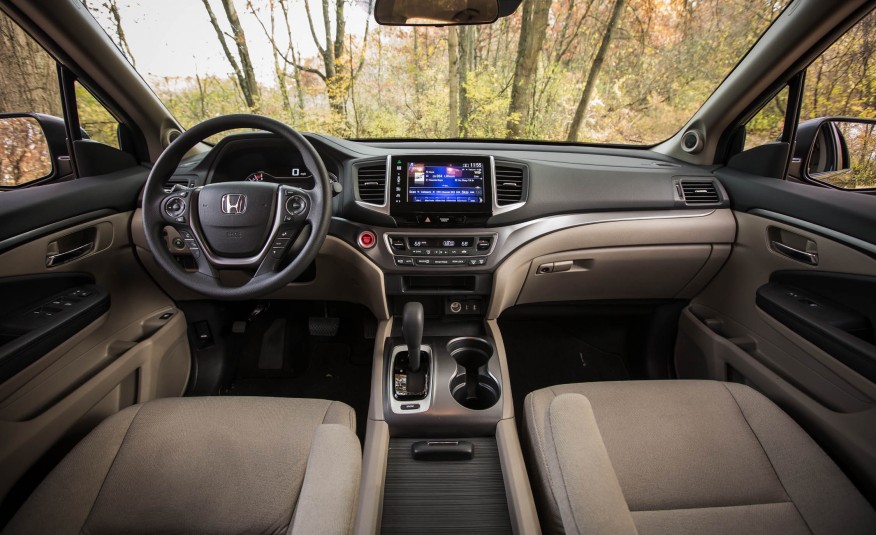 At the track, this front-drive EX model clocked a zero-to-60-mph time of 6.2 seconds, a whisker behind the all-wheel-drive Elite, even though the EX weighed 254 pounds less. (Blame the powerful V-6’s eagerness to spin the front tires during aggressive launches.) But all things being equal under the hood, the EX’s advantage in power-to-weight shows up as the drag race continues: It was a second quicker to 100 mph. Not that many owners are likely to push their Pilot to triple-digit speeds. But for those so inclined, we can report that the Pilot inspires confidence as speeds climb, right up to the governor-limited 112-mph top speed.

There’s confidence around bends, too. The new chassis is stiffer than its predecessor, spring rates are higher, and shock-absorber damping is firmer than that of the previous generation. This doesn’t make the Pilot a sports car; pushing hard in a set of switchbacks will still provoke moderate rock and roll, as well as abundant understeer. But as with exploring the Pilot’s top speed, the likelihood of owners testing its limits of adhesion is slight, particularly with kids onboard. And doubly so for those with kids prone to motion sickness.

Athough the steering could be quicker (3.2 turns lock-to-lock) and more informative at around-town speeds, the Pilot’s responses in emergency maneuvers are respectable by the standards for this class. Those maneuvers might not be quite as prompt in the lesser trim levels, a distinction we attribute to tires. Touring and Elite Pilots wear 245/50 tires on 20-inch wheels, whereas our EX test example was equipped with 245/60-18 tires. The setup produced a softer ride, at the expense of grip (0.75 g versus the Elite’s 0.80). Braking distances were almost identical for both vehicles and about average among three-row crossovers. This is not to say good. Let’s call it adequate.
More Dimension, More Room

As noted in our test of the Elite model, the new Pilot is bigger than its predecessor, dimensional increases that translate directly to the interior. There’s even enough room in the third row for a couple of adults to perch without too much whining, although getting three people of any size to ride back there for more than a few miles is likely to provoke civil war. (In the Elite trim level, second-row seating is a pair of captain’s chairs, reducing the potential passenger count to seven.) Nonetheless, this is a distinctly more comfortable Pilot generation, its increased roominess augmented by more soft-touch surfaces and a much more attractive dashboard layout. 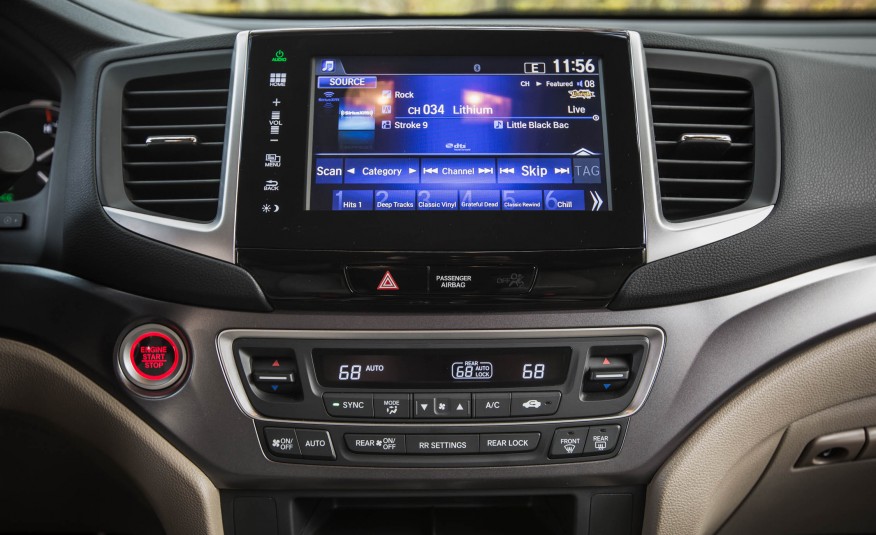 Although the cabin’s appearance has been improved, we can’t say the same for its function, owing to Honda’s relentless commitment to a touch screen for all secondary controls, great and small. Adjusting audio volume or changing stations in a moving Pilot, for example, is a hunt-and-peck challenge, no matter how smooth the ride quality. At least the Pilot is exceptionally quiet at all speeds—parental units won’t have to raise their voices much to yell at their kids. EPA ratings for the front-wheel-drive Pilot are 19 mpg city and 27 mpg highway, up 1 mpg in the city and 2 mpg on the highway from the previous model. (Ratings are 1 mpg higher in the city with the nine-speed and 1 mpg lower all around with AWD.) We managed to beat the EX’s city rating, logging 20 mpg overall.

As noted, there are essentially five trim levels. But typical of Honda, the five are subdivided according to particular items of equipment. Thus, there are four different versions of the EX: 2WD and 4WD, with or without Honda Sensing (a package of collision-avoidance tech). There are no options or option packages. Each sub-category is treated as a separate model. At $34,330, our two-wheel-drive EX with Sensing was four rungs above the bottom of the Pilot pricing ladder, which begins with the two-wheel-drive LX at $30,895.

Honda Sensing includes automatic emergency braking, which will track the Pilot’s closing rate on traffic ahead (via camera and radar), decide whether the driver is paying attention, flash a warning, and apply the brakes if/when the driver fails to respond. It also includes adaptive cruise control, lane-departure warning, lane-keeping assist, and road-departure mitigation. The last two include system intervention to nudge the vehicle back to the middle of the road when it even thinks the Pilot is approaching an edge line. Its warning is a steering-wheel shudder that feels as though something might be coming undone in the front suspension—and is particularly annoying on two-lane back roads. The whole Sensing package adds a grand to the bottom line.

The EX isn’t exactly stark, with a standard features inventory that includes the 8.0-inch touch screen (minus navigation), seven-speaker audio with HondaLink infotainment, Pandora interface, fog lights, Honda’s passenger-side Lane Watch camera, remote engine start, and, in this test unit, the Honda Sensing package. So as always, it gets to be a question of what a prospective buyer considers essential in a family vehicle. Can you and your family be happy without a giant sunroof or navigation? Obviously, that one’s your call.