The 2023 Honda Odyssey will make you forget any negative thoughts about minivans once you experience its refined ride, solid handling, and quick-accelerating V-6 engine. Don’t worry—if a minivan is on your shopping list because you need practicality, the Odyssey won’t disappoint there either. Its novel Magic Seat system allows you to position the second row seats in a variety of ways—including a configuration that’ll keep feuding kiddies appropriately separated. The third row disappears into a recess in the floor to allow for more cargo space. The cabin isn’t as well connected and tech-focused as those in rivals such as the Chrysler Pacifica or Kia Carnival, but the Honda’s infotainment suite offers more than just the necessities, including an optional rear-seat entertainment system to keep the youngsters occupied.

A new mid-range Sport model joins the lineup this year and wears gloss black exterior accents, unique 19-inch wheels, black leather upholstery with red stitching, and red ambient interior lighting. The rest of the Odyssey lineup is unchanged, but Honda is adding a complimentary scheduled maintenance plan for all 2023 models; it covers oil changes and other required dealership maintenance services for the first two years or 24,000 miles of ownership. The base LX trim has been culled from the herd.

Pricing and Which One to Buy

Go with the EX-L. The EX comes well equipped, but the EX-L adds luxury features that families will love, such as leather seats, extra USB ports in the rear, and a power-operated rear liftgate.

Fleet-footed, efficient, and polished, the Odyssey is a sweetheart that requires zero compromises. The Odyssey changes direction crisply, and from behind the wheel it's easy to forget you're piloting a three-row van. The steering is direct and the effort is light, but more feedback from the road would be welcome. Driving enthusiasts won't rave—it's still a minivan, after all—but the Odyssey is the best-driving minivan, and its nimbleness makes it competent in corners and easy to drive on narrow roads. We tested an Elite, and found that its ride wasn't as compliant as that of our long-term Pacifica, but its standard 19-inch wheels could be partly to blame. An EX-L we drove wore 18-inch wheels and seemed better-suited to the pockmarked Michigan roads that we drive daily. Over most road surfaces, though, the Odyssey displays a comfortable ride, and few passengers will complain. 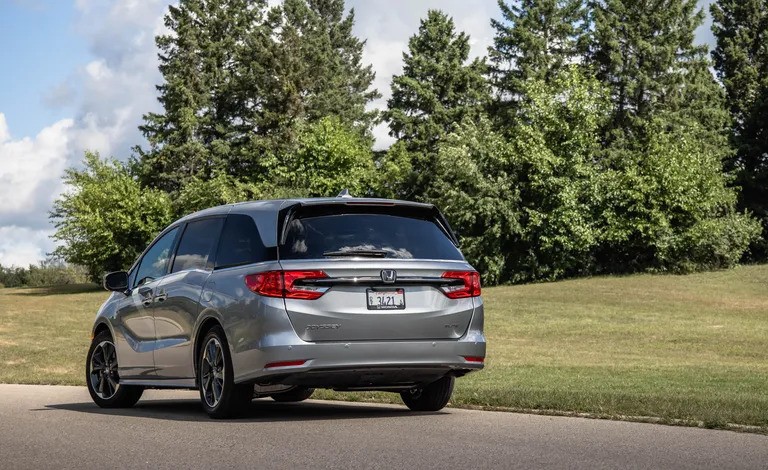 The Odyssey is rated at 19 mpg city and 28 mpg highway, according to the EPA. In our real-world highway testing, our test vehicle outperformed its EPA estimate, delivering 30 mpg. For comparison, our long-term Pacifica managed 33 mpg. For more information about the Odyssey's fuel economy, visit the EPA's website.

Hauling people and things to places near and far is a minivan's primary mission, and the Odyssey completes said mission with aplomb. Its second and third rows are among the roomiest in the class, and its second-row seats are far more comfortable than the Pacifica's. Honda's inventive second-row Magic Slide seats slide both side to side and fore and aft, allowing for multiple configurations. Throw in a quiet cabin, a sprinkle of ingenuous tech—like an in-cabin camera that enables you to monitor the kids in the second and third rows—and the Odyssey is a hauler that is fit for the modern family. Its square shape and low load floor mean there is a lot of space for hauling cargo, but some rivals do it better and with less hassle. Removing those second-row seats requires muscle, as the two outboard seats weigh 68 pounds each. Once removed, the Magic Slide seat mechanism remains on the floor, creating an obstacle for loading cargo. With the third row of seats stowed and its second row removed, our testing revealed that the Odyssey hauled one fewer carry-on suitcase than the Pacifica. 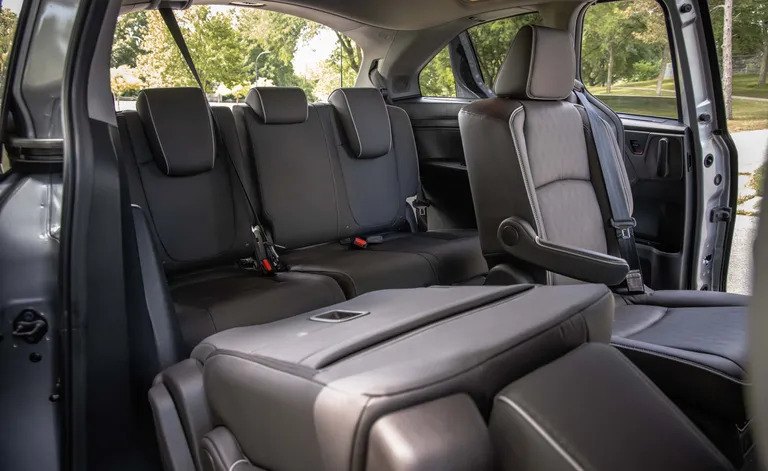 All Odysseys get an 8.0-inch touchscreen infotainment system called Display Audio. The software allows for customization of the menu layout and smartphone connectivity not only via Bluetooth, but also via Apple CarPlay and Android Auto capability. Standard on both the Touring and Elite is a rear-seat entertainment system with built-in streaming apps.

Honda's standard warranty package on the Odyssey mirrors that of most of its rivals and offers nothing that stands out in the crowd. The Carnival is the warranty winner here, with a 10-year policy for its powertrain and a limited warranty that lasts two years longer than any of its rivals. 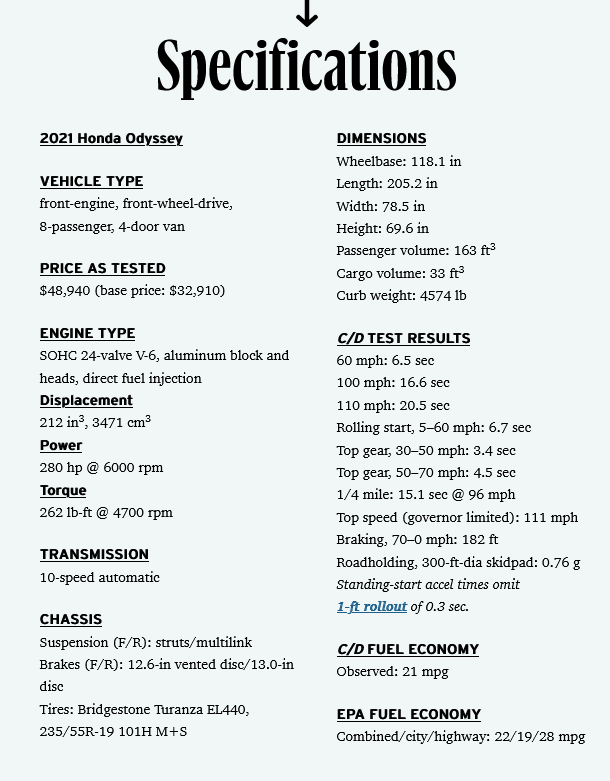