The latest Honda CR-V and Subaru Forester are quite similar as solid examples of their kind, but one is better than the other.

Within the compact-crossover class, both the 2019 Honda CR-V and the 2019 Subaru Forester are high-profile stalwarts that float toward the top of a crowded and hotly contested segment. As one of Honda’s big sales guns, nearly 380,000 CR-Vs found homes last year. While Subaru moves only about half that many Foresters, the brand’s conservative development approach means that Subie devotees should continue to find the fresh-for-2019 Forester entirely agreeable. Setting brand loyalties aside, which of these two is actually the better small SUV? 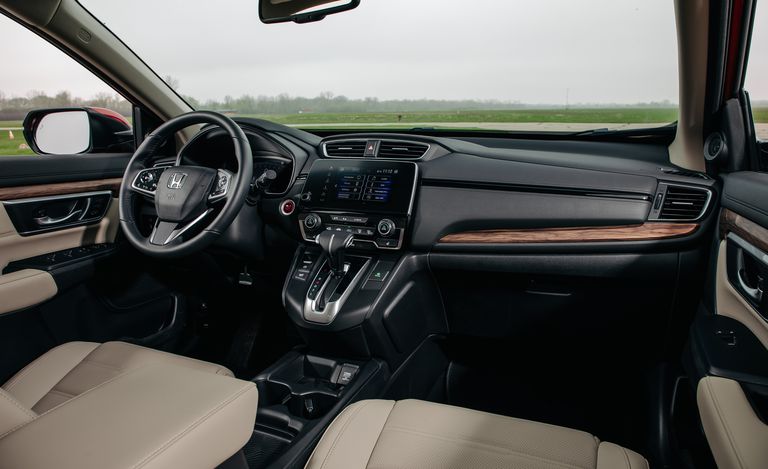 To find out, we lined up top-level Touring models of each and broke out our microscopes. All Foresters come standard with all-wheel drive, but adding it to a CR-V tacks on an extra $1400, which brought the as-tested prices of our two examples to near parity at a smidge more than $35K. Neither vehicle offers any factory options other than paint color at this loaded level. At the opposite end of the spectrum, the entry-level CR-V LX starts at $25,395 versus $25,270 for the starter Forester 2.5i.

Aside from their different engine formulas—a 190-hp turbocharged 1.5-liter inline-four in the Honda to the Subaru’s 182-hp naturally aspirated 2.5-liter flat-four—both test vehicles are remarkably similar on paper. Both have continuously variable transmissions (CVTs) and a 29-mpg combined fuel-economy estimate from the EPA. Their exterior dimensions and five-seat interior packaging are pretty much the same. And at this price point, both come well stocked with convenience amenities, plentiful touchscreen infotainment tech, and each brand’s suite of active-safety gear, including adaptive cruise control, blind-spot warning, automatic forward emergency braking, and lane-keeping assist. The CR-V’s anti-collision warning system is easier to excite into action than the Forester’s, sometimes annoyingly so (something we also noticed with our long-term 2018 Honda Accord). But the Subaru’s standard DriverFocus driver-attention monitor is equally quick to yell at you if it thinks your eyes are wandering away from the road. 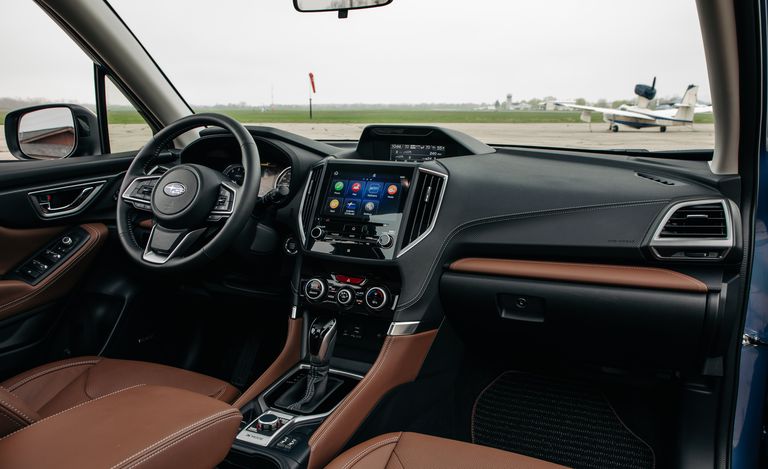 With the Honda’s modest weight advantage over the Subaru combined with its greater abundance of low-end torque—179 lb-ft peaking at 2000 rpm versus the Forester’s similar twisting might peaking at 4400 revs—the CR-V’s 7.4-second zero-to-60-mph time is more than a second fleeter than the Subie’s. But it’s also noisier, emitting a 77-decibel groan at full throttle that only drops to 72 decibels at a 70-mph cruise. Both readings are 4 decibels louder than in the Forester, although Honda’s CVT does limit high-rpm droning better than Subaru’s does. The Forester earns marks for its better stopping performance from 70 mph—168 feet to the CR-V’s 176—as well as for its 32-mpg return on our 75-mph highway fuel-economy test, 1 mpg less than its EPA highway estimate. The CR-V only managed 29 mpg, 4 mpg less than its EPA highway score.

Both SUVs go down the road with good overall competence and comfort, although the Subaru offers a more relaxing temperament for cruising with its plush ride quality and expansive greenhouse that makes for excellent visibility. The Honda is by no means rough-riding or hard to see out of in comparison, yet it does respond better to pavement undulations and directional changes when being chucked into corners. Along with linear and precise steering, there’s a feeling of responsiveness and composed body motions in the CR-V that are lacking in the Forester, which is better suited to plodding along with traffic. While neither of these utes is in any way performance oriented, we like the CR-V’s willingness to be driven spiritedly without incurring serious compromises elsewhere.

Honda has given the latest CR-V’s cabin a rather clean and straightforward design layout, with its greatest demerit being the large, clunky shift lever poking out of the dash, which doesn’t feel up to par with the rest of the cabin. Aside from some cheap-looking fake-wood trim, this is a solidly assembled and attractive environment. The Forester feels similarly good inside, has a less obtrusive shifter on the console, and is dotted with pleasant materials, albeit ones that come together with a bit more complexity. The Subaru makes the stronger initial presentation of the two, and the Touring’s 8.0-inch touchscreen infotainment system (a 6.5-inch unit is standard) is more responsive and better organized than the Honda’s 7.0-inch unit, which lacks the tuning knob of the brand’s latest system found in the Accord. 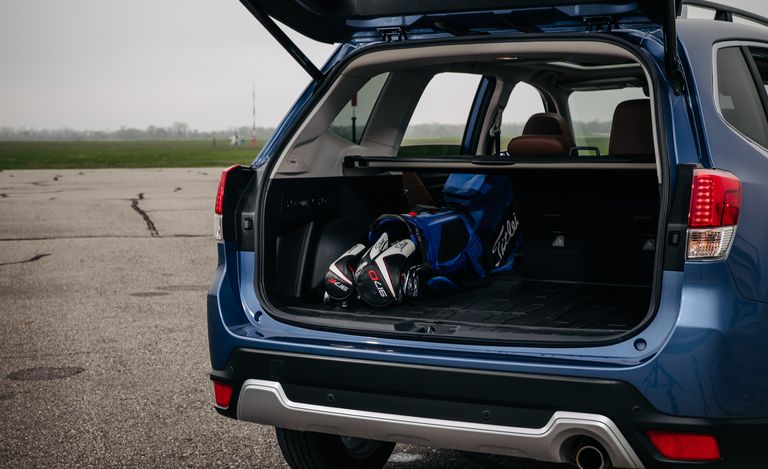 The similarities between the CR-V and Forester extend behind the front seats to airy and comfortable rear quarters that are equally capable of housing two adults with ease and three abreast for shorter trips. Both SUVs have rear climate-control vents and power outlets in the back of their center consoles, although the Subaru also features heated outboard rear seats whereas the CR-V does not. With its greater front-seat space, the Forester caters more to passengers in terms of overall space. The Honda is slightly more adept at hauling cargo, thanks to its larger storage cubbies throughout and five additional cubic feet of cargo space in back. We squeezed 10 carry-on suitcases behind the CR-V’s second row and 25 with the seats folded. The Forester can accommodate 11 carry-ons behind its rear seats but only 23 behind the fronts.

With much to like and so little between them, you can’t really go wrong with either the Honda CR-V or the Subaru Forester. Both are excellent examples of modern compact SUVs. But the Honda is more powerful and satisfying to operate as a vehicle while remaining perfectly agreeable, which is a quality we appreciate even in basic driving appliances. Along with its well-rounded list of attributes, that’s enough for the CR-V to edge out the Forester in our ranking of the segment.