What happens when the Accord and Camry get a little extra kick? 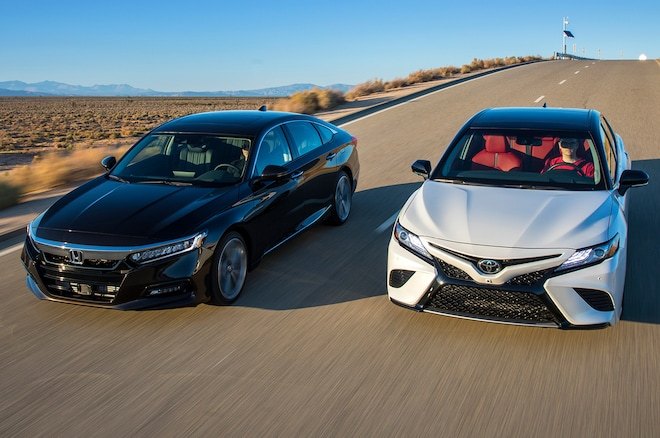 For more than three-quarters of family-sedan buyers, the base engine provides more than enough zip to get around town. Some like it hot, though, and for that remaining fraction, both Honda and Toyota offer powerful optional engines.

Comparing the mainstream powertrains for these two cars, we found the Accord to be the all-around superior vehicle. With the matters of rear-seat space, trunk capacity, number of USB ports, and smartphone integration already settled, we’ll focus singly on how well the versions with the big engines deliver on their sporting pretensions. 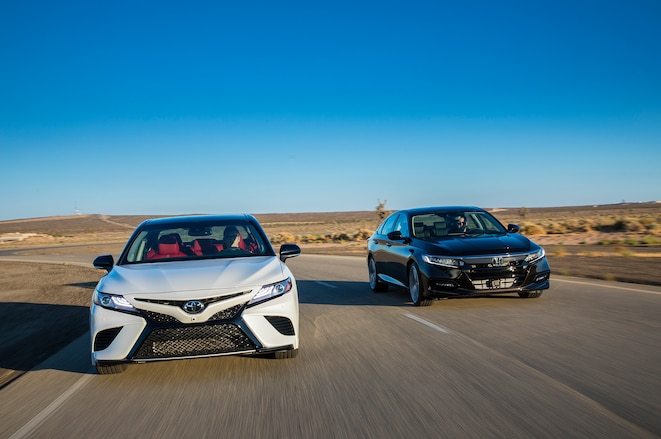 Honda replaced its 3.5-liter V-6 with a 2.0-liter turbo-four derived from the—wait for it—Civic Type R. Yes, Honda’s street-racing beast lent its engine to its sibling family sedan. At 252 hp, it’s down 26 hp on the old V-6, but the turbo breathes an extra 21 lb-ft of torque for a healthy 273, which comes on much lower in the rev range. You can have it with an all-new 10-speed automatic or a six-speed manual. It’s a bold strategy, Cotton. Let’s see if it pays off for them.

The challenger walks loudly and carries a big stick. Under the SE/XSE bodywork remains Toyota’s potent 3.5-liter V-6, all 301 hp and 267 lb-ft of it. It’s available exclusively with an all-new eight-speed automatic, and on paper it looks to have the Accord beat. Such a potential advantage is loudly telegraphed by all the racy bits added to the car, including quad exhaust tips, black wheels, fake vents, and a fish-pout fascia that’s arguably more handsome than the gigantic grille that looks like an air-condition vent on the base car. The Honda, though not pretty, either, eschews the boy-racer treatment and lets its 2.0T trunk badge do the talking. 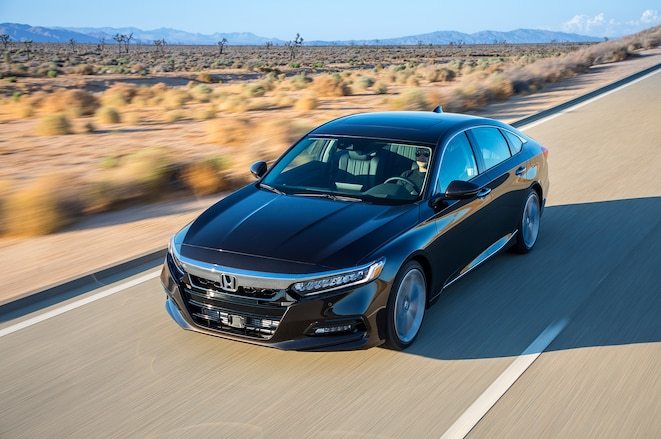 Despite the power disadvantage, the automatic Accord is 0.1 second quicker to 60 mph than the Camry, and it posts an identical quarter-mile time.

Although rowing your own gears is indisputably more fun, the Honda stick shift’s throws and clutch pedal travel are both long—likely to ease the commute drudgery of a quick-shift box—and this adds a half-second penalty both to the 0–60 and quarter-mile times. One ridiculous point: You must engage the electronic parking brake before you can start the manual-transmission Accord. Patch that, pronto, Honda.

Behind the wheel, the manual-transmission Accord feels the most aggressive—there’s no waiting on the torque converter to lock up. The Camry, meanwhile, doesn’t feel as sharp off the line but comes alive at 4,000 rpm and pulls hard to redline. The automatic Accord, meanwhile, is the Q-ship of the crowd, with a long, smooth pull of power. Its 10-speed also performs better on the way back down through the gears, offering downshifts more readily and smoothly than the Camry’s. 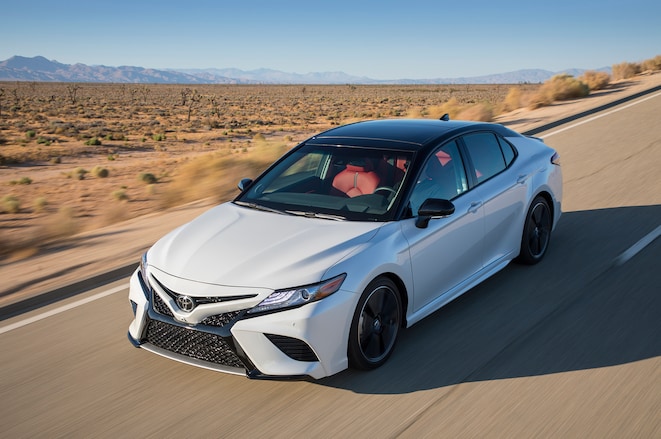 It’s the same situation in the corners. The Accord, particularly the Touring model with its adaptive dampers, feels confident and planted. Even without the fancy dampers, high-zoot Accords have better tires than the base model, which helps highlight its excellent body control and surprisingly flat cornering. The seats on sporty Accords could use thicker side bolsters, but regardless, it’s a remarkably capable and fun family sedan on a back road.

The Camry, for all its bravura, is less capable when pressed. The steering is lighter but less fluid, with an aggressive ratio immediately off-center that makes the car feel darty and nervous. This and the high-end surge from the engine make it feel as though you’re going faster in the Camry when you’re actually not. It leans more in corners than the Accord, and body motions aren’t as well controlled, all of which is made worse by the flat seats that don’t even try to hold you in place.

In fact, this hotted-up Camry handles just like the four-cylinder Camry XLE, with just a bit more cornering speed, thanks to stickier tires. With the V-6 engine also available on XLE models, as far as we can tell the XSE is primarily a body kit and tires, not a true sport model—the lack of corner-entry downshifts are a disappointing omission. That said, we were able to hustle the Camry V-6 around a track faster than most people are going to do in the real world.

The skidpad tells the tale. The Camry XSE V-6 pulls only one-tenth of a g harder than the XLE four-cylinder and three-tenths of a g weaker than the Accord 2.0T Touring on average. The XSE V-6 uses its extra power to make up time on the figure eight, but the 2.0T Touring is right behind it pulling slightly higher average g.

It’s the same story in stopping. The Accord has a somewhat aggressive brake pedal with strong initial bite for a family sedan and little pedal travel needed to get the job done. Its significantly upgraded tires also help with stopping distances. The Camry, by contrast, has a long and soft brake pedal, which is partly responsible for extending its stop from 60 mph by 7 feet.

With the Camry XSE V-6 handling so much like the XLE four-cylinder, you might expect it to ride and drive the same, too, and you’d be right. The Camry rides somewhat firm for a family sedan, but the Accord 2.0T with fixed dampers rides about the same—but it does have better body control to eliminate the head toss of the Camry. Step up to the Touring’s adaptive dampers, and the Accord rides better, too. In tests zooming around a closed-course oval, the Accord felt more composed at 125 mph than the Camry did at 90.

Once again, it’s a clear win for the Accord. It’s quicker, handles better, and is more enjoyable to drive fast. It also rides better and costs less for more stuff, and you can even get it with a manual transmission. That’s two for two for Honda.