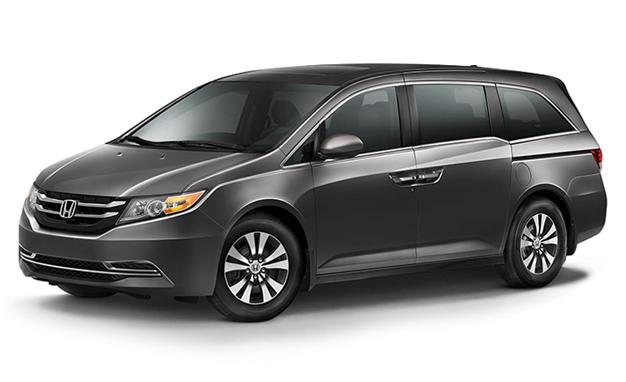 The Odyssey has charmed our staff for years with its unrivaled road manners, smooth powertrain, and accommodating interior. With room for up to eight passengers to sit comfortably, the Odyssey is also fuel-efficient, thanks to the cylinder-deactivation feature on its 248-hp 3.5-liter V-6. Perhaps most exciting is the built-in vacuum in the cargo area. Featured on certain models, it’s so obvious in its usefulness you’ll wonder how you ever lived without it. Cheerios everywhere, beware! 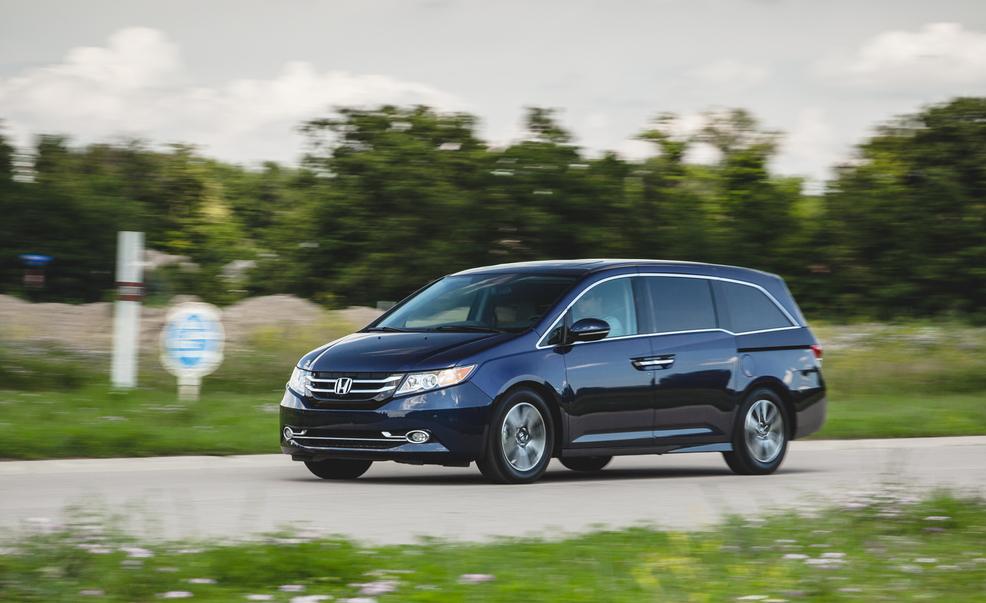 As much as we wished this review of Honda’s refreshed-for-2014 Odyssey minivan focused solely on the rig’s awesome built-in HondaVac vacuum cleaner, it wouldn’t have been very useful to those of you actually interested in how well this minivan, you know, does minivan things. (We did, however, cover the vacuum in a separate, slightly informal test.) Given that none of the 2014 Odyssey’s changes are mechanical in nature, consider this test a refresher on all things Odyssey.

The current-generation Odyssey first opened its dual sliding side doors to the world four years ago, and our long-term test of a 2011 model was our last full report on the van. For 2014, buyers can choose from—count ’em—seven trim levels: base LX, EX, spicier EX-L (basically the EX plus leather), EX-L with RES (EX-L with a rear-seat entertainment system), EX-L with Navi (leather-lined EX with navigation), Touring (bundles the EX-L’s rear-seat entertainment system and navi), and the focus of this test, the range-topping Touring Elite.

All Odysseys now have headlights with darkened trim, LED-lit taillights, and updated wheel designs, plus the latest front fascia, hood, and grille. While not drastically changed in appearance, the van still looks quite sharp for a big box, and it retains its low and wide front end and snazzy “lightning bolt” side window-line zigzag. 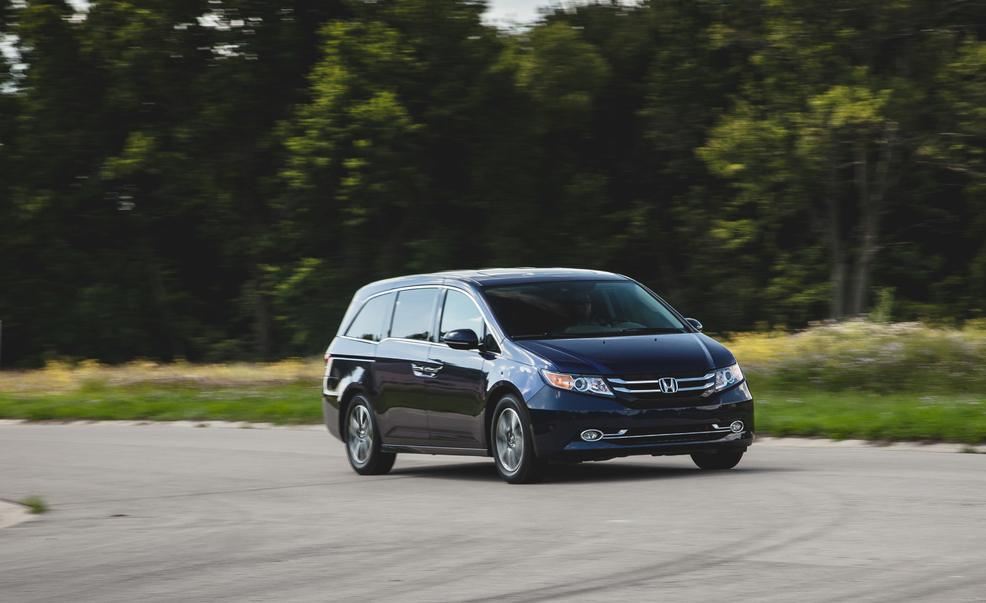 The dashboard is reconfigured with easier-to-read gauges and now accommodates a second, low-mounted central display—devoted only to audio and phone functions—on EX models and up. We find the new dual-screen setup a bit ridiculous and unnecessary; you can, for example, have audio information displayed on both screens at the same time. The lower screen is operated by touch, whereas the upper unit is manipulated via hard buttons confusingly located below the lower display. That the two screens’ resolution and graphics aren’t matched is almost a secondary complaint.

A carry-over 3.5-liter, SOHC V-6 powers the front wheels of every Odyssey, sending its 248 horsepower through a six-speed automatic. The six-cog unit was previously available only on upper trims, leaving lesser versions with a five-speed and lower fuel-economy figures, but now all examples have the better EPA-bestowed ratings of 19 mpg city/28 mpg highway. Our loaded Touring Elite managed a decent 22 mpg over more than 1300 miles of driving.

Rejoice, parents afraid of giving up any semblance of driving pleasure by switching to a minivan: The Odyssey remains among the very best minivans to drive. Our recorded test numbers paint a rather mediocre dynamic picture—0.75 g around the skidpad, a long 197-foot stop from 70 mph—but seat-of-the-pants impressions convey a buttoned-down and willing performer. Unfortunately, Honda hasn’t sped up the van’s slow steering, which makes for lots of arm-flailing during parking-lot maneuvers. It feels out of step with the lively and capable chassis, although to be fair, hair-trigger turn-in is between a lift kit and deployable pontoons on the wish lists of most minivan shoppers.

The transmission is another carry-over item we wish Honda had tweaked. It upshifts as early as possible, which is understandable in a world rife with tightening efficiency regulations, but it also stumbles over itself finding the right gear when you call for a downshift. The eons it takes to select a cog—usually not the one wanted or needed—means many passing opportunities will go missed. The automatic even manages to flub upshifts, at times introducing a lumpy, ill-timed short shift while the driver is still accelerating. Luckily, the smooth V-6 mitigates the transmission’s sins and yanks the 4618-pound Odyssey to 60 mph in an impressive 7.5 seconds. 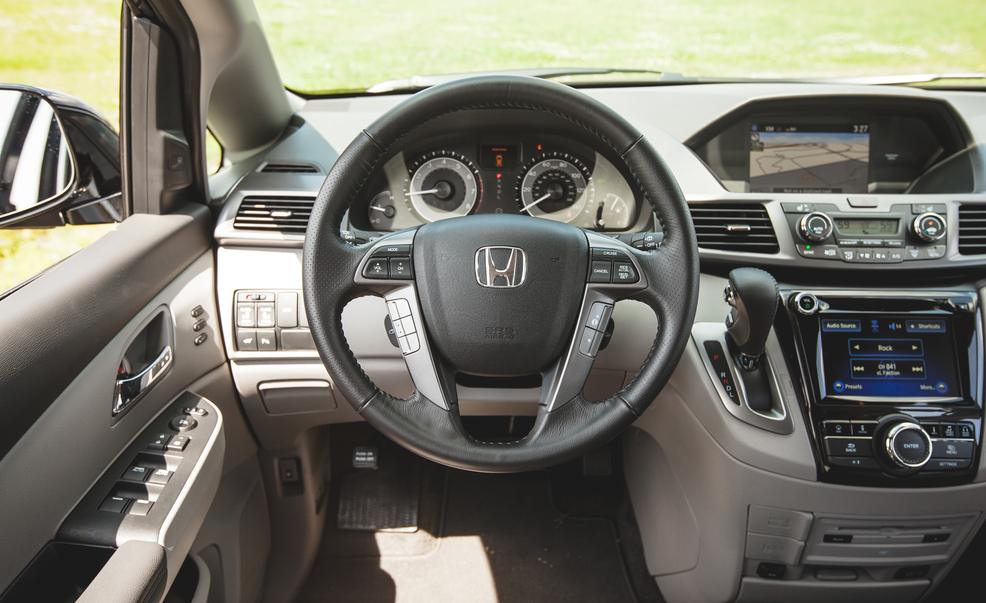 To go along with its sporty chassis, the Odyssey continues to hold plenty of mainstream appeal thanks to its smooth and comfortable ride. The third-row seats smoothly fold into the floor to create a flat cargo hold, although we noted that removing the second-row chairs is cumbersome, taking us upward of 10 minutes and requiring a second person. Because they don’t fold into the floor, the Odyssey’s second row must be removed entirely and in three heavy pieces. With every seat in place, there’s plenty of room for up to eight pieces of human cargo.

Just Call It the Acura TLV—Or Would That Be VDX?

If you can do without some frills or safety features and seating for only seven, the basic LX brings the same essential goodness for $29,655. (To see what comes on other Odysseys, read our breakdown of the 2014 lineup’s pricing.) Regardless of which model is chosen, the Odyssey performs its duties far more effectively than would almost any three-row crossover, and it’s more stylish than direct competitors like the Dodge Grand Caravan or the Nissan Quest. If you need a family box, we’d say look no further than this Honda.