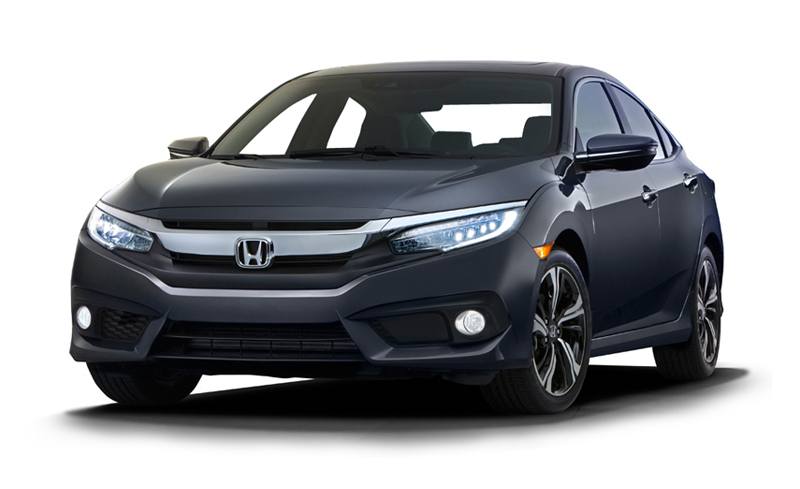 Sweet-handling and fun to drive, the Civic deserves serious consideration from enthusiasts and non-enthusiasts alike. The base engine is a 158-hp 2.0-liter four; a 174-hp turbo 1.5-liter is optional. The 2.0-liter has a six-speed manual, while a CVT is optional. Sadly, the turbo offers only the CVT. Both engines are peppy, but the turbo is definitely the hot rod of the two. The coupe shares the sedan’s powertrains and has a sportier ride with quicker steering. The back seat, though, is tight. 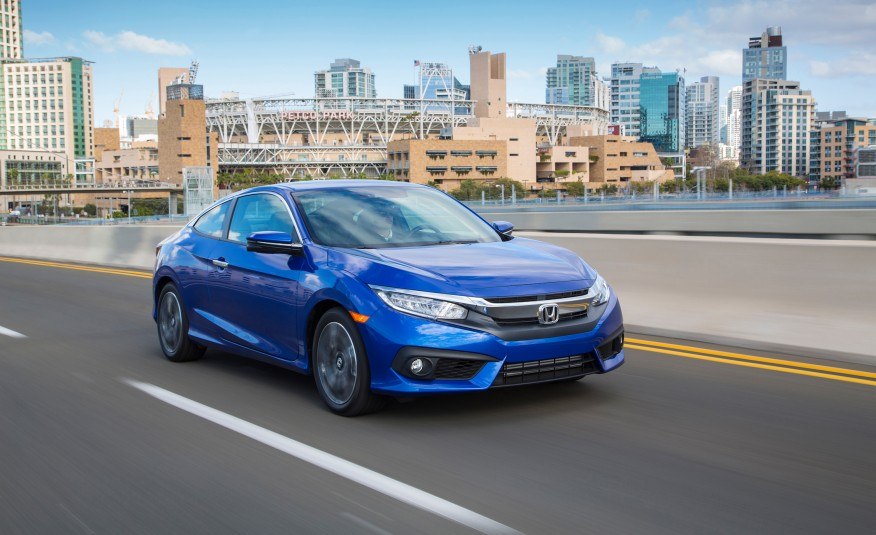 Chapter two of the Civic renaissance.

According to Honda research, buyers who prefer coupes to sedans are primarily seduced by styling and image, feeling that the absence of that second set of doors suggests that both car and driver possess a sporty persona. That’s not always the case, but the dynamic character of the new Civic coupe vindicates the sporty part of the proposition.

The coupe’s sheetmetal is even edgier than the sedan’s, a welcome departure from the caution that has marked so many Honda designs—with tidier dimensions, more sculpting, and wheels that fill their wheel wells right to the edge of the fenders. 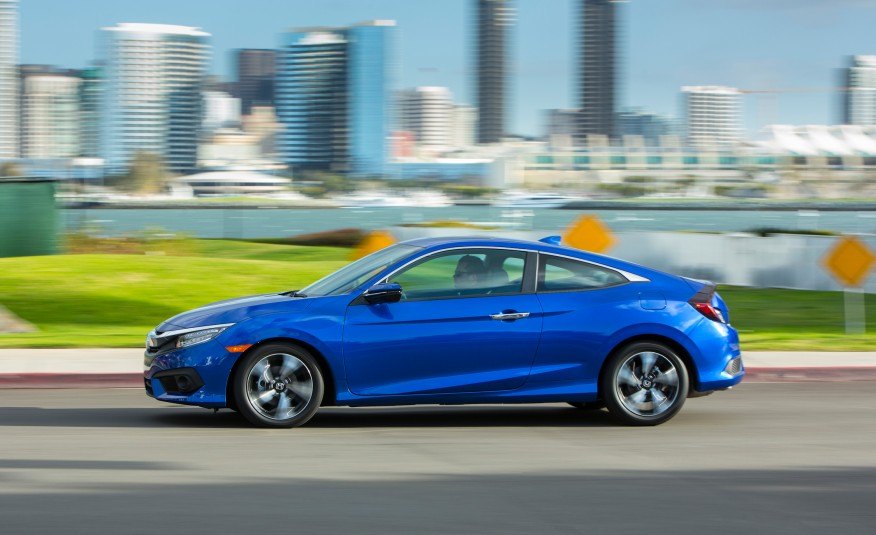 The coupe shares the sedan’s 106.3-inch wheelbase, a sizable 3.1-inch stretch versus the previous generation. But at 176.9 inches, the new coupe is an inch shorter than its predecessor, 1.8 inches wider at 70.8 inches, and a smidge (0.1 inch) lower at 54.9 inches. It also has much wider tracks: 60.9 inches front and 61.5 rear. Although overall length has shrunk, the overhangs have diminished even more, and compared with the new sedan, the coupe is 5.4 inches shorter—all of that chopped out of the rear overhang—and almost an inch lower. The net is a coupe that looks compact in the athletic sense—squat, taut, and ready to rock.

Smaller dimensions and extensive use of high-strength and ultra-high-strength steel in the body shell ought to add up to reduced mass, but the official specifications are a little murky on this score. Honda’s listed curb weights for the old coupe range from 2754 to 2916 pounds. Depending on trim level, the 2016 coupes will weigh between 2735 and 2896 pounds, according to Honda.

Nevertheless, the new coupe should have a performance edge over the previous generation, thanks to its new engines—a naturally aspirated 158-hp 2.0-liter four-cylinder (in LX and LX-P models) and a 174-hp 1.5-liter turbo four (EX-T, EX-L, and Touring). In our test of a new sedan equipped with the 1.5-liter turbo and a continuously variable automatic transmission (CVT), we logged a 6.8-second zero-to-60-mph sprint. That’s just 0.3 second behind the last Civic Si we tested, and Honda insiders say that in development testing the coupe has been a little quicker than the current Si. This leads us to wonder how much power the new Si will bring to the game when it makes its appearance, as well as what its body style will be—coupe? sedan? hatchback? all three?—but Honda isn’t talking about that yet.

Our initial experience with the new coupe was confined to turbo-powered versions with Honda’s torque-converter-enhanced CVT, and the impressions were much the same as those logged in our sedan test. Stomp on the throttle and once the turbo spools up, the Civic’s front tires emit a healthy chirp and forward momentum builds in a hurry. The spool-up is quick with the transmission in D, but for even quicker results, slip the lever into S. At wide-open throttle the CVT delivers simulated upshifts and exhibits little of the slipping-clutch sensations that often accompany transmissions of this type. Paddle shifters aren’t part of the deal, however, and the driver is still aware that it’s a CVT. 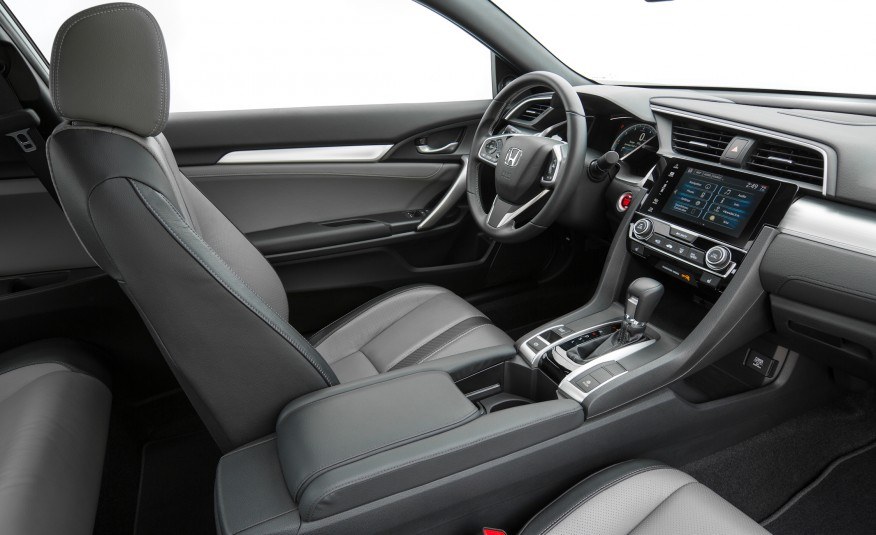 Is the coupe any quicker than a similarly equipped sedan? We’ll need a test track to nail that down. But we don’t need a test track to identify an area of performance where the coupe holds an edge over its four-door cousin—as well as its rivals. That would be on the mountain roads near Julian, California, east of San Diego, where the coupe impressed. While the sedan’s unibody gets high marks for its robust structure, the coupe takes chassis rigidity a step further, with selective stiffening around the front and rear suspension pickup points.

Suspension elements—dampers and springs—are also stiffer, varying by trim level. The basic LX model, for example, gets firmer damping and increased front roll stiffness. The LX-P and EX-T have increased spring rates as well as more authority in the dampers; EX-T and higher trim levels get 17-inch wheels. The EX-L and Touring models get refinements of the foregoing, including hydraulic rear bushings for better road isolation and lighter wheels for reduced unsprung weight.

While the dynamic distinctions among the various trims are subtle and hard to quantify in short driving stints, the bottom line is a coupe that’s quick on its feet, responding promptly to steering inputs, with modest body motions and absolutely no drama. It’s easy to be precise with the steering, as well, thanks to an electrically assisted rack-and-pinion system that’s exceptionally quick (2.2 turns lock-to-lock), accurate, and tactile. The steering wheel further enhances the process with its just-right rim thickness and grippy feel.

Pushed hard, the coupe will do exactly that—push. It’s agile, but like most front-drive cars, sporty or not, the weight bias is decidedly forward, and it’s not very difficult to provoke noisy protest from the front tires in enthusiastic cornering. A more performance-oriented tire would probably raise the understeer threshold—all models are shod with all-season rubber—and also shorten braking distances. It’s easy to modulate pressure at the brake pedal, and fade is not an issue, but we don’t anticipate much improvement over the sedan’s 178-foot stopping distance from 70 mph in our test.

The new coupe posts solid marks on the comfort scorecard. Although the suspension tuning is distinctly firmer than the sedan’s, it’s also compliant enough to take the edge off sharp bumps and expansion joints. And Honda’s extensive efforts with sound insulation pay off here, just as in the sedan. The new Civics raise the bar for quiet operation among compacts. 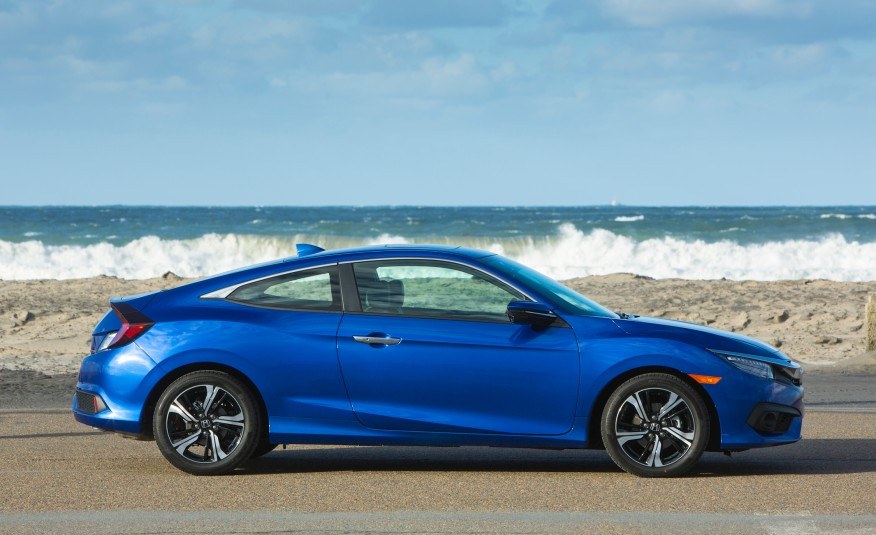 Honda insists Civics equipped with the 1.5-liter turbo engine also will get the six-speed manual-transmission option currently available with the 2.0-liter. We got a very brief experience with a manual-equipped turbo mule, a sedan in heavy camo, and found it to be typical of Honda shift-for-yourself gearboxes with short throws and crisp engagements. But the product planners get cagey about precisely when it will arrive; our best guess is late in this model year.

The new infotainment and safety features that made their debut with the sedan carry forward to the coupe. Of the latter, the lane-keep assist system is particularly annoying—it’s a little random in picking up the edge and center lines, and a little too eager to intervene when it does see them.

Inside, the coupe sustains the high quality of materials established by the sedan, including first-rate bucket seats, as well as a rear seat actually habitable by adults. Although the new coupe is shorter than its predecessor, the stretched wheelbase allowed Honda to expand rear-seat legroom by 5.1 inches.

Like some other elements of the ongoing Civic saga, pricing remains an unknown—at least until the mid-March on-sale date. We have estimates, but that’s complicated by the revised trim levels—there are now five, culminating in the new Touring model. But this much is certain: The new Civic coupe makes the outgoing version as forgettable as last year’s curling-tournament results. And the sportiness goes well beyond mere appearance.