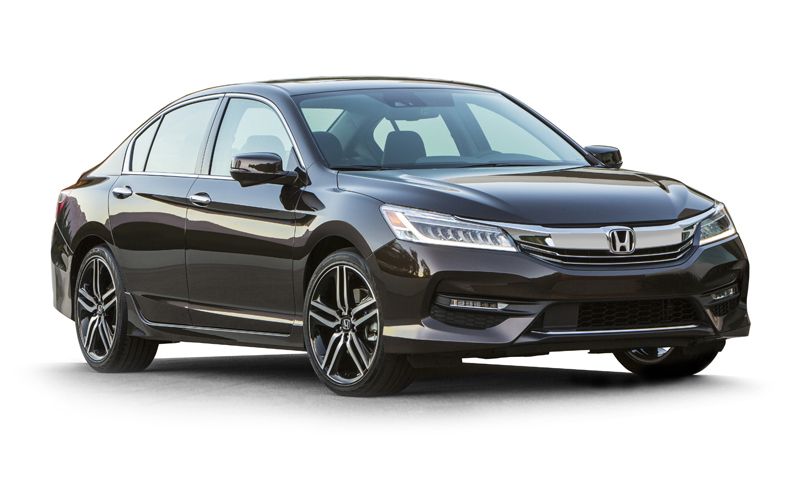 The playful and engaging Accord offers more than you’d expect, which helps make it a 10Best winner for 2016. A 185-hp 2.4-liter four and a six-speed manual are standard in both the coupe and sedan; Sport models get a slight bump to 189 hp. A CVT is optional, as is a 278-hp 3.5-liter V-6 with a six-speed automatic; the coupe offers a six-speed manual—our choice. EX and above models feature Apple CarPlay and Android Auto, but some may find the button-less infotainment system annoying and fussy. 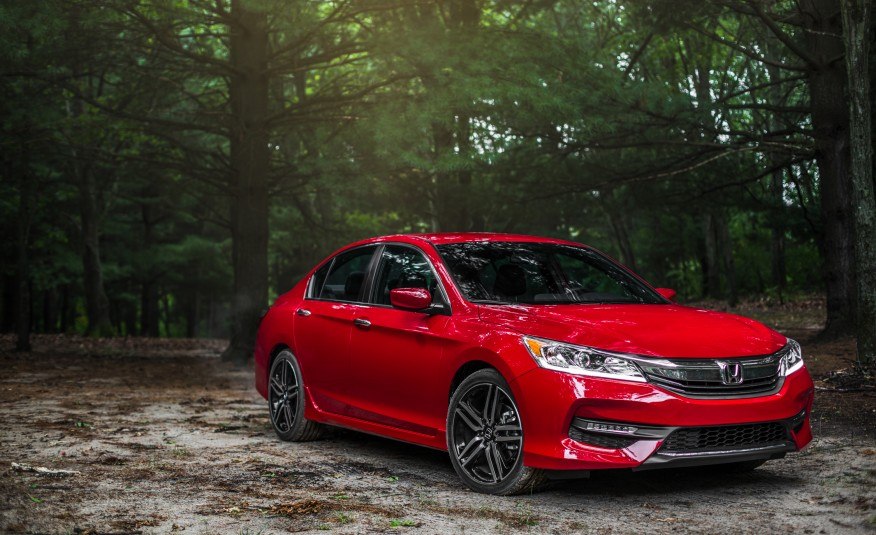 A compelling argument for buying off-the-rack.

You generally can separate new-car buyers into one of two groups: those who pore over the order sheet with painstaking detail and deliberate over each option, and those who just want the pain to be over as quickly as possible. By default, those of us with tastes that lean toward more sporting transportation are generally forced into the former group, a fate automakers—and salespeople, naturally—are quite happy to let us suffer as we dig a financial grave via the order sheet. The Honda Accord Sport, however, takes a more sensible approach. By zeroing in on a few key standard features focused on upping the sporting quotient—we’ll get to the specifics in a moment—while keeping an eye on the bottom line, it’s actually possible to leave the dealership with a well-equipped, yet technically option-free, Accord sedan for around $25K.

Honda positions the Accord Sport in between the entry LX and mid-level EX trims, so we’ll use that jumping off point to see what makes the Sport the pick of the litter. First off, the Sport utilizes a high-flow exhaust with dual tips that manages to squeeze a bit more horsepower and torque from the 2.4-liter inline four-cylinder that it shares with its brethren, making for total outputs of 189 horsepower and 182 lb-ft (versus 185 and 181 elsewhere in the lineup). Does it result in a noticeable seat-of-pants increase in performance? Not really, but we appreciate Honda’s dedication to the concept. Next up are the 19-inch wheels, which dwarf the 16-inchers on the base car, as well as the 17-inchers on the EX. In fact, the only other Accord to get 19-inch rolling stock is the top-dog Touring, which starts at more than $35K. The brakes get the first-class treatment, too, with 12.3-inch ventilated front rotors and 11.1-inch solid rotors in the rear. The LX makes do with 11.1-inch units all around, and the EX and EX-L get an 11.5/11.1-inch combo; the only other Accord trim to get the large front binders, again, is the Touring. Cosmetic touches for the Sport include a body-colored decklid spoiler and rocker-panel extensions (both also shared with the Touring). Inside, the Sport gets exclusive aluminum pedals and a leather-wrapped steering wheel borrowed from the EX-L models and above. 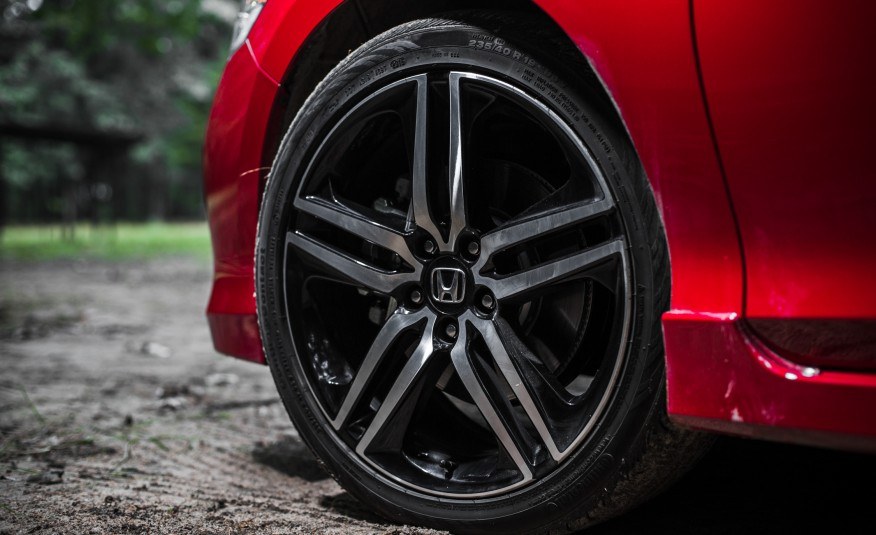 Theoretically, it’s possible to add some options to the Sport. For instance, Honda Sensing—the maker’s batch of driver aids that includes lane-keeping assist, adaptive cruise control, and collision mitigation—is available on the Sport, but choosing it requires opting for the continuously variable automatic transmission, which adds nearly $2000 to the bottom line and certainly isn’t very sporting (even with its shift paddles). Let’s remain focused on the six-speed manual Sport in off-the-rack trim.

The Accord’s typically fluid ride-and-handling balance is in full effect here, as is reasonably communicative electric power steering, which combats the Sport’s nose-heavy 59/41-percent weight distribution with light but never limp steering action. Acceleration is seamless if not exactly quick, with the zero-to-60-mph dash consuming a full 7.0 seconds and the quarter-mile run requiring 15.5 seconds with the Sport clearing the traps at 92 mph. While those results easily top the 7.6- and 15.9-second times we extracted from a 2016 Accord EX with a CVT automatic, we should note that better numbers might still be possible, as our Sport’s engine was particularly green, with only 164 miles on the odometer. (For results on a mechanically similar Accord, see our recent long-term test of a manual Sport; that car hit 60 in 6.6 seconds and covered the quarter-mile in 15.2.)

Fresh-baked though it was, the six-speed manual transmission was already a polished performer, the shifter sliding from gate to gate in typically intuitive Honda fashion. The Accord lineup received moderate updates for 2016, and the manual is said to benefit from tighter internal tolerances, improved synchronizers, and a new linkage that reduces the amount of free play in the lever, which made selecting gears a joy. (Old-school Honda owners take note: Honda says a “constant-mesh helical reverse gear mechanism” has been implemented to significantly reduce the sometimes-unavoidable and unwelcome grunch noise that can occur when shifting into reverse. In our experience, it works.) Those aforementioned Sport-exclusive aluminum pedals? Put on your boogie shoes, because they are perfectly placed to dance on. 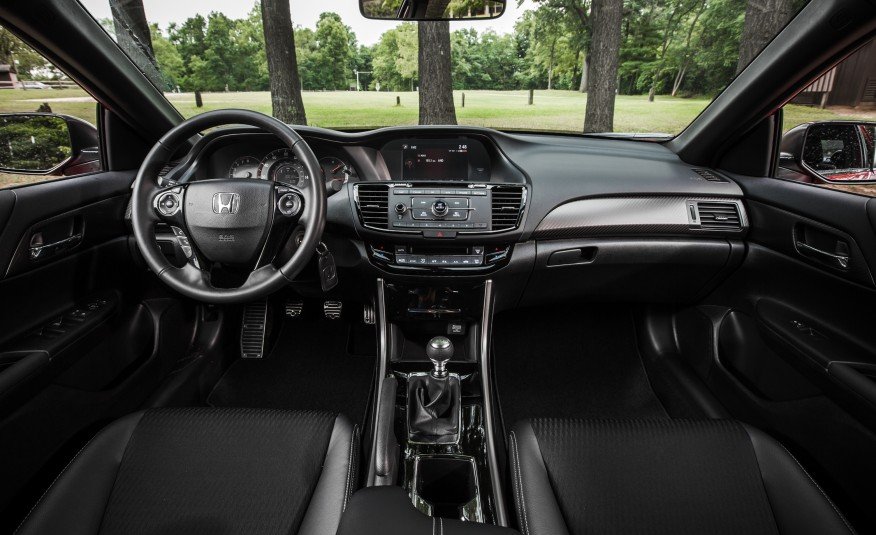 The Sport’s lateral-acceleration number did little to disrupt the Accord roadholding status quo, its 0.86 g of grip bettering the aforementioned EX’s 0.80 number, but also laying a tiny smackdown on the 0.84 g we extracted from the 2016 Accord coupe V-6—results you’d expect from a model named “Sport,” right? Braking performance, however, doesn’t stick to the plan. Requiring 183 feet to stop from 70 mph, the Accord Sport consumed five more feet than the 2016 Accord EX, despite the EX being equipped with smaller, 11.5-inch front rotors. We suspect the problem was the Continental ContiProContact all-season tires; although the rubber was capable of delivering decent cornering performance, our tester singled out the tires as the primary culprit in the substandard braking number.

Overall, then, the question is: Does the Sport’s cherry-picked list of features transform the Accord into a value-priced, ready-made sports sedan? That answer depends largely on what you are looking for and where you are coming from.

Buyers familiar with the Accord’s light-and-precise nature; spacious, conservatively styled interior; and attractive value/performance balance—the very attributes that have landed the Accord on our annual 10Best Cars list more times than any other single vehicle—likely will find what attracted them to the car in the first place, only refined and honed for a slightly more engaging experience. People looking for a low-cost alternative to a brawny, rear- or all-wheel-drive Teutonic pavement-pounder will need to realign their sensibilities to the Accord Sport’s lithe, front-wheel-drive demeanor. But for those interested in getting behind the wheel of a true fun-to-drive four-door sedan without pillaging junior’s college fund, the Accord Sport’s $25K price of entry is pretty compelling—and the only decision to make is the color.