The new subcompact 2016 Honda HR-V seeks to cater to a new crossover market. 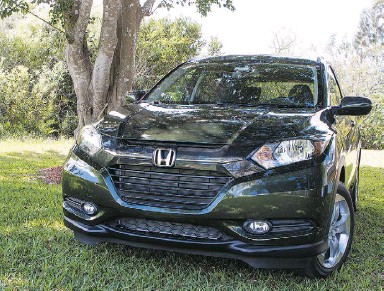 The Honda HR-V shares a lot of similarities with its bigger crossover brother, the CR-V.

Miami Beach, Fla . • Honda makes it all sound so complicated. According to Hayato Mori, senior manager of product planning and business development for Honda Canada, the HR-V is part coupe (its styling), part minivan (passenger- and cargo- hauling utility), but all SUV (for versatility and the elevated seating position that consumers give as the excuse for the popularity of the modern CUV), all wrapped up in a package small enough to fit into the burgeoning subcompact crossover segment (currently occupied by the Chevrolet Trax, Nissan’s Juke and the soon-to-be-released Mazda CX-3).

But, here’s everything you really need to know about the new HR-V; to no one’s surprise — and to the delight of many I suspect — it’s just a shorter CR-V with less cargo capacity and a smaller engine. Indeed, cross-referencing HR-V and CR-V specifications shows an incredible amount of overlap. Their wheelbases — 2,610 mm for the HR versions of Honda’s “versatile” wagon versus 2,620 mm for the CR — are almost identical (despite the fact that the HR-V is based on the much smaller Fit platform). Ditto for most of the interior dimensions — including front and rear leg- and headroom (but excluding shoulder room because the CR-V is 48 mm wider) — that are within 20 mm of each other.

There are other stark similarities between Honda’s compact popular CUV (the CR-V) and the new subcompact version (the HR-V), the most surprising of which is actually in the engine department. Despite having a much smaller engine — the HR-V is powered by the Civic’s 1.8-litre four while the CR-V has a more powerful 2.4L four — and being roughly 200 kilograms lighter, the HR-V is but 0.2 L/100 km more economical (comparing automatic, AWD equipped variants of both) than its CR-V counterpart. Aerodynamics — the HR- and CR-V are remarkably similar in this regard — are seemingly more important than weight and power.

Both also offer Honda’s Real Time All-Wheel-Drive system (the HR-V will be available in FWD guise), CVT-type automatic transmission are available on both and the base audio system for the two is a 160-watt AM/FM/CD system with four speakers. There are marked differences — the CR-V’s 2.4 does pump out 44 hp and 54 more pound-feet of torque than the HR-V’s little 1.8L and the HRV’s navigation/air conditioning controls are all new — but the similarities are nonetheless remarkable.

Until you get aft of the rear seats, that is. Then, there’s finally some indication that the CR-V is actually 263 mm longer overall, again, despite its wheelbase being only 10 mm longer. Indeed, most of the CR-V’s greater length is aft of the rear wheels, the biggest difference between the two CUVs being in cargo carrying capacity. While the HR-V boasts a slightly-largerthan-a-large-sedan 657 litres of cargo volume, the CR-V almost doubles that with 1,054 L. Drop the rear seats and the HR-V’s trunk space grows to 1,631 L while the CR-V expands to a minivan-challenging 2,007 L. The point I’m trying to get across is that while the CR-V and HR-V interiors might seem dimensionally similar up to the rear seats (by Honda’s official estimation, the HR-V’s passenger volume is only 3% less than the CRV’s), the CR-V’s greater rear overhang basically doubles its cargo capacity.

That seemingly singular distinction, however, is the reason that Honda sees com- pletely different audiences for the HR- and CR-V.

According to Jean Marc Leclerc, Honda Canada’s vicepresident of auto sales and marketing, the HR-V will appeal to the newly married and recently empty-nested, the smaller CUV’s reduced trunk space not a detriment for those with no/young children. The CR-V, Leclerc postulates, will continue to appeal to those of middle age raising multiple kids and hauling their hockey/football/soccer equipment.

Indeed, according to Leclerc, Honda Canada hopes to move 10,000 HR-Vs this year, half of which will be to consumers new to the brand and the other 5,000 Honda loyalists moving up from the smaller Fit which has the same newly married Millennial/ empty-nester demographic.

As much as the success of the HR-V will depend on how it drives (we can’t comment on the HR-V’s driving abilities yet because of a news embargo), the real determinant of its success will be how Honda prices the new subcompact CUV. Honda Canada’s only indication until now is that the HR-V will start in the low 20s, their trepidation at pricing the HR-V only three months before its on-sale date an indication of the fine line the company is walking between Fit ($14,575 to $21,375) and CR-V ($25,990 to $35,040).

Price it too high and it won’t sell; price it too cheaply and both CR-V and Fit sales might suffer. Honda Canada is well aware of this quandary; I suspect they’ll be just fine walking that tightrope.