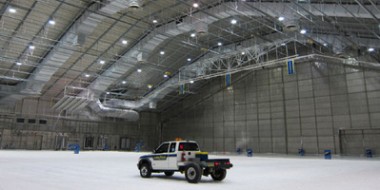 FORT WALTON BEACH, FLA.—It’s 35C this summer day on the Florida panhandle. The sun is beating down relentlessly. People are swimming in the warm ocean nearby — and I’m driving on winter tires in the snow.

Yeah, that’s about the same look I had when they told me where I was going.

The source of this arctic atmosphere is the McKinley Climatic Laboratory, site of the largest climatic chamber in the world, at the Eglin Air Force Base. No matter what the weather is outdoors, the lab can create almost any type of condition, with a wide variety of storms thrown in.

My mission was to check out Goodyear’s new Ultra Grip Ice WRT, a new dedicated winter tire made specifically for light trucks, SUVs and crossovers. Tire and auto manufacturers often rent this military laboratory for testing, sometimes even when similar conditions can be found for free outdoors.

The key is consistency. Accurate testing requires conditions that remain constant —temperature, snow, rain — to reduce the chance of variables in tests carried out over a length of time. For North Americans, it’s much easier to get people and equipment to McKinley than it is to make the long trip to Scandinavian winter proving grounds.

In 1934, the U.S. military recommended that tactical units train under winter conditions, and in 1942 a facility was set up in Fairbanks, Alaska. It wasn’t ideal. Aircraft needed for battle were frequently grounded due to extreme cold, and the military realized a proper facility was crucial.

Lt. Col. Ashley McKinley, an expert in cold-weather testing, developed the idea of a refrigerated hangar that could provide consistent results. The main testing chamber opened in 1947 and is still in use today. (It had a major overhaul in 1997.)

The building is large enough to accommodate jet fighters and commercial aircraft. Along with five smaller chambers, the lab is able to replicate sand and dust storms, freezing rain, fog, salt spray and solar radiation. It can go as hot as 73C or drop as low as –54C.

For my visit, the chamber was set to –9C, with several centimetres of snow and a glare ice pad — all essential if you’re going to appreciate just how much of a difference it makes to drive on dedicated winter tires.

They’re no longer called “snow tires” any more, because they’re not just for snow. They’re superior even on dry pavement in the cold, especially on sunny days when the snow melts, creating alternating patches of dry and wet asphalt.

Rubber is affected by temperature, normally becoming hard in the cold and soft with heat. Tires must do the opposite to maintain traction and handling: the rubber compound in winter tires is formulated to stay soft when cold, while summer tires stay firm when it’s hot.

So-called all-season tires are a compromise between the two, and when the temperature drops to just 7C, they start to lose their grip.

Tire traction is the single most important safety feature on any vehicle (along with a trained, attentive driver, of course). Everything else, from electronic stability control to seat belts, works to save your skin once your tires have lost contact with the road.

The Ultra Grip Ice is Goodyear’s first application of its new Winter Reactive Technology (WRT). It includes a sticky new rubber compound, a special pattern that helps to channel water and slush away, and new designs in the “blades” of the tread blocks. In the centre of the tread, the blades open to allow maximum contact when accelerating or braking. On the tire’s edge, they lock together to maintain the rigidity needed when the wheels are turned.

To measure a tire’s grip, which then helps engineers to improve it, Goodyear uses a special “Traction Truck,” a pickup truck with its box removed and its cab stuffed full of data-collecting equipment. The driver flips a switch, and a special electric motor spins one rear wheel — again, providing multiple-test consistency that even a skilled driver couldn’t accurately maintain.

Afterwards, it’s a shock to walk outside into the heat and humidity. Glasses and camera lenses take several minutes to defrost. Nearby, Air Force personnel sweat as they prepare a fighter jet for takeoff — while another puts on gloves, a hat and heavy coat and gets ready to go inside a chamber where the South truly meets the North.