Vehicle Comparison: The 2011 Honda Odyssey vs. the 2011 Toyota Sienna

Talk about a grudge match. The Honda Odyssey and Toyota Sienna minivans are both all-new for 2011, upping the ante in a battle for supremacy that has been going on for years. Both are superb family vehicles with cavernous interiors and oodles of flexibility, but only one introduces innovations that are impossible to ignore, as well as efficiency that’s difficult to surpass. That van is the 2011 Honda Odyssey. 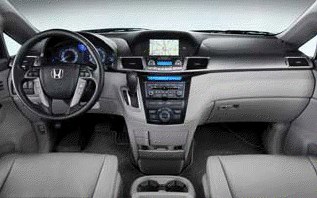 Both vans offer a lot of style, but the 2011 Honda Odyssey (MSRP starting at US $27,800) has a unique look that delivers more than just style points. The van’s “lightning bolt” window line is not only a unique identifier, the dip in the glass lets more light into the third-row seats, lending a feeling of airiness to an area that can feel claustrophobic in other minivans. The second benefit is that the tracks and motors for the power sliding doors are mounted lower in the bodywork, which results in increased shoulder room for the third-row passengers.

Honda offers a 3.5-liter V6 making 248 hp and 250 lb/ft of torque across the board in the 2011 Odyssey. With the exception of the Odyssey Touring Elite, all trims get a five-speed automatic transmission. (The Elite gets a six-speed.) Toyota offers both a 187-hp 2.7-liter four-cylinder and a 265-hp 3.5-liter V6 in the 2011 Sienna. Both are paired with a six-speed automatic.

Although the Toyota Sienna’s V6 may look better on paper, the Honda engine comes out a winner because it’s essentially its equal in terms of horsepower and actually offers more torque than the Sienna’s V6. It’s more fuel-efficient than either the four- or six-cylinder in the Toyota. Odysseys with the five-speed automatic are rated at 18 mpg city/27 mpg highway. The Odyssey Touring Elite, with its six-speed, fares even better: 19 mpg city/28 mpg highway. In contrast, the two Sienna engines are rated at up to 24 mpg highway.

Inside, the 2011 Odyssey boasts a list of specs and features that are sure to win over any family. Cargo storage? You’ll find 38.4 cubic feet of space behind the breathtakingly simple One-Motion 60/40-split third-row Magic Seat®. When stowed (the Magic Seat folds flat into the floor almost effortlessly), cargo volume expands to 93.1 cubic feet. When you need to do some serious hauling, removing the second-row seats opens up 148.5 cubic feet of space – enough for, well, a whole lot of stuff.

The innovation continues in the second row of the bestselling Odyssey where Honda offers a new three-mode seat. Families with small children will be especially interested, as Honda had them specifically in mind when they designed it. The three-mode seat is standard in Odyssey EX and higher trim levels, and consists of a pair of captains’ chairs, plus a removable center seat that can slide forward independently of the other two. All three positions have LATCH anchors (five sets total, more than any other minivan on the road today), and this is where the three-mode seat’s flexibility becomes apparent.

First, a child seat can be mounted in the center, and the seat’s sliding feature means it can be moved closer to the parents in front for easy tending to the child. In other vehicles, installing three child seats across the second row can be tricky, given how wide they can be. Not so in the Odyssey. One of the 2011 innovations is a Wide Mode feature; the two outside second-row seats can be moved outboard by an additional one and a half inches apiece. Doing so creates a second row that is wide enough to take three child seats across with ease. Even if you’re not transporting kids, the three-mode second row shows off its utility. The center seat can be removed completely, or flipped down to create a substantial center armrest with cupholders. Odyssey offers more front-, second- and third-row legroom and more overall passenger volume as well.

The 2011 Sienna offers comfortable second-row seating – either a traditional bench in lower trim levels, or a pair of captains’ chairs in upper trims. Neither setup boasts the level of innovation on display in the Honda, however. Toyota’s leather-clad captains’ chairs in its high-end models have a recline feature, complete with footrests that extend out to support the passenger’s legs. Impressive-looking, to be sure, but kids in child or booster seats are completely unable to take advantage of it, and professional reviewers have been quick to point out that even average-sized adults will find that the recliners come up short on comfort, as they’re best suited to people with shorter legs. The Toyota seats do slide fore and aft, but so do the Odyssey’s and, as noted earlier, the Odyssey’s slide outboard as well. The Honda’s seating configurations are simply more flexible.

Another new feature introduced in the 2011 Odyssey is the Honda Ultrawide Rear Entertainment System in the Touring Elite model. This, combined with the Elite’s 650-watt, 12-speaker, 5.1-channel surround-sound audio system, effectively transforms the rear seats into a home theater away from home. A 16.2-inch screen flips down from the roof, and, thanks to supplemental inputs, can show up to two video sources side-by-side (one source is the van’s DVD player), or display a single source on the widescreen. The system’s auxiliary inputs include an HDMI jack, so that a high-definition source can be used while underway such as a Blu-ray disc player or gaming system. A pair of wireless headphones is included, and the third row has jacks for traditional wired headphones as well. The 2011 Toyota Sienna also has an available widescreen entertainment system, but there’s no high-def connectivity, a shortcoming when you consider how many devices now natively support HDMI.

At the bottom of the ergonomically rearranged instrument panel in every new Honda Odyssey is another feature that will be greatly appreciated by every passenger: aA cool box that’s tied in directly to the A/C system, so that cool air is pumped in regardless of the climate control settings that are heating or cooling the cabin. The cool box can hold up to four 20-ounce bottles or six 12-ounce cans. Load up some cold drinks, hit the power button and the cool box will help keep them cold. This is also great for keeping that impulse-buy candy bar you grabbed at the gas station from getting all melted and messy. The Toyota Sienna offers a well-organized instrument panel, but there’s no cooled compartment like the Odyssey offers, and parents know how important it can be to have a chilled drink on standby during a long road trip.

The Odyssey’s list of standard or available features goes on forever. It includes a Song By Voice feature in nav-equipped Odysseys that lets you pull up songs from your iPod or the available Hard Disk Drive simply by uttering their names. Oh, and that available Honda Satellite-Linked Navigation System can suggest scenic routes and tap into the Zagat Survey restaurant guide to give you additional details on the eateries in the points-of-interest database.

Naturally, features like Bluetooth hands-free telephone, XM Satellite Radio and a comprehensive set of active and passive safety features are also on tap. In Odysseys equipped with the removable front center console, there’s a deep storage bin and even a flip-up trash bag ring that lets you quickly attach a bag to collect all the juice boxes, food wrappers and other garbage that can accumulate.

Both the Odyssey and Sienna provide safety for occupants, however, only Odyssey offers Honda’s Advanced Compatibility Engineering™ (ACE™) body structure, which enhances passenger protection in the event of an accident.

The short of it is that while the 2011 Toyota Sienna boasts a number of improvements over its predecessor, it simply doesn’t match the number of innovative new features Honda engineers worked into the 2011 Odyssey. At the end of this minivan battle royale, the Odyssey scores a knockout. It is, once again, the best minivan in the business