Honda most recommended by Consumer Reports 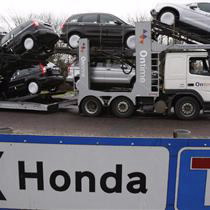 Which automaker builds the best cars? The word “best” can be taken to mean many different things, but when it comes to predicted reliability Consumer Reports picks Honda as number one.

This said Subaru and Toyota prove worthy of your attention too, with the former earning a “Recommended” ranking for every model it sells. The news came out in the consumer advocate magazine’s 2009 Auto Issue, currently available on newsstands throughout the United States and Canada.

While Subaru and Toyota fared well, Honda excelled in predicted reliability, scoring a “Recommended” grade with all of its vehicles except for the quirky Element crossover, which came very close.

Toyota did well on reliability grades too, not unusual for the Japanese brand, while the European brands were praised for performance, comfort and safety, plus incremental improvement in overall reliability.

And what of the domestics? Ford is top dog thanks to its F-150 pickup truck and Flex family hauler achieving “Recommended” scores and most of its lineup rated above average, while General Motors got eight vehicles on the “Recommended” list, including the Cadillac CTS, Chevrolet Malibu, Corvette, Pontiac G8, and all four of its Lambda-based crossovers, the Buick Enclave, Chevrolet Traverse, GMC Acadia and Saturn Outlook.

Not unlike its current sales numbers Chrysler struggled with Consumer Reports too, without a single vehicle “Recommended”.