Honda used an approach known as ACE, or advanced compatibility engineering, to dissipate crash energy outside the area affected by a head-on crash. Pictured is the test of the 2013 Honda Accord four-door sedan. 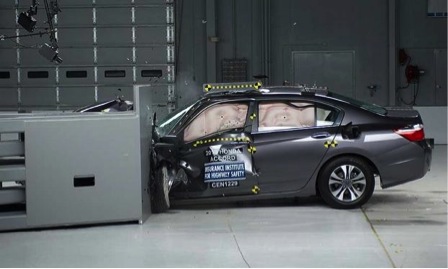 The so-called small overlap test involves crashing the front corner of a car into a barrier at 40 mph. The Insurance Institute for Highway Safety devised the test to simulate a collision with a stationary object such as a tree or a utility pole.

Just three out of 11 luxury cars rated “good” or “acceptable” on the insurance industry group’s first round of tests this summer, but today the IIHS gave a good rating to the four-door Honda Accord and the Suzuki Kizashi, and an acceptable rating to 11 more mid-sized cars.

“Normally we see new technology and new innovations go into the luxury cars first, so we see them doing better,” IIHS President Adrian Lund said. “This is a bit of a surprise.”

The Toyota Camry sedan and Prius v hybrid ranked worst on two measures of safety, leading IIHS to slap them with a “poor” overall rating.

In both of Toyota’s vehicles, the crash caused significant intrusion into the occupant compartment — in the case of the Camry, the front wheel was forced sharply backward toward the driver’s feet. The driver-side airbags also failed to fully prevent a blow to the test dummy’s head in both crashes.

“They’ve got to find a way to strengthen the occupant compartment and manage the forces out there on the edge of the vehicle,” Lund said of Toyota.

Automakers are responding by adding structures to absorb impacts to the front corners of a car, and by strengthening compartments so that wheels cannot be forced so easily backward toward passengers’ feet.

Ford, Subaru, Volkswagen and Honda all told IIHS they designed vehicles to handle the new test, Lund said, and Toyota has told the group it plans to follow suit.

“With this new test, the Institute has raised the bar again and we will respond to the challenge,” a Toyota spokesman said. “We are evaluating the new test protocols and can say that there will not be one single solution to achieve greater crash performance in this area.”

The spokesman added that Toyota leads all automakers in the number of models named “Top Safety Picks” for 2012 by IIHS. Those 19 models from Toyota, Lexus and Scion include the Camry and Prius v.

Honda used an approach known as ACE, or advanced compatibility engineering, to dissipate crash energy outside the area affected by a head-on crash.

Chuck Thomas, chief engineer for automotive safety research at Honda, said the alterations added a bit of weight to cars such as the Accord, which was redesigned for model year 2013 with the new test in mind.

“We always want to develop a vehicle that’s absolutely as light as possible, but also strong enough to do everything we need to do,” he said. High-strength steel helped make up for some of the increase, he added, so about “10 to 15 pounds is what the guys like me have added to the vehicle to improve performance.”