The 2016 Best Cars for Families winners have the best combination of safety and reliability ratings, excellent reviews from the automotive press and the space and features that keep the entire family happy. New high-tech features, such as in-car wireless Internet, teen driver controls and smartphone apps, were considered alongside traditional criteria such as passenger and cargo space.

Mercedes-Benz and Honda tied with the most awards won by individual brands, taking home four awards each. Mercedes-Benz won half of the awards in the eight luxury categories. What sets the brand apart from its competitors are features in the C-Class, GLE and GLC – such as in-car Wi-Fi, rear-seat USB ports, tri-zone climate controls, hands-free liftgates and rear sunshades – that make traveling with a family more comfortable.

Honda’s models are among the top picks for families because of their large cargo spaces – ideal for strollers, grocery bags and more. For the sixth consecutive year, the Honda Odyssey won Best Minivan for Families, the longest streak in the awards’ history. The Odyssey’s available features, such as a 16-inch rear-seat entertainment screen that can show two different movies side-by-side, a built-in vacuum and a power liftgate, can make life a little easier for parents who have their hands full. In addition, professional car critics say the Odyssey has great driving dynamics, unlike other minivans.

“Finding the best family car can be a time-intensive process,” said Jamie Page Deaton, managing editor of U.S. News Best Cars. “Whether you need extra room for car seats or want to monitor your new teen driver, the Best Cars for Families have options for every type of family.”

Of the 21 Best Cars for Families winners, six are also winners of the 2016 Best Cars for the Money awards because of their excellent long-term value. 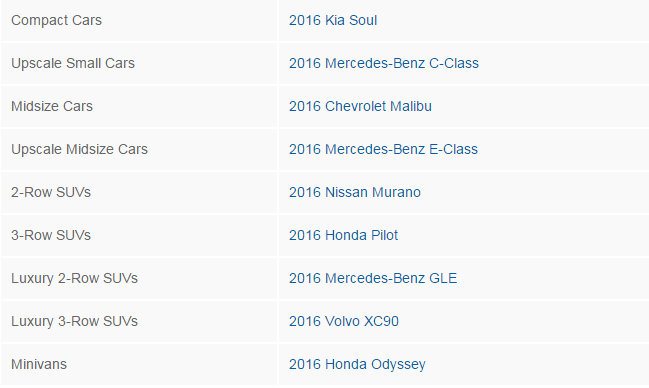 For the full set of winners and finalists, visit http://usnews.com/cars-families.

The award methodology combines professional automotive reviews, safety and reliability ratings, seating and cargo volume and the availability of family-friendly features. Within each of the 21 automotive categories, the vehicle with the highest composite score is named the Best Car for Families in that category.